Congratulations to our very own Farida Littlemore for being awarded the prestigious Lorna Sherlock Award from the WA Occupational Therapy Association in recognition of her outstanding contribution to the profession in WA, particularly in the area of mentoring. Farida graduated as an OT in 1992 and after originally working in Singapore she moved to Perth and completed her Masters of Clinical Science at Curtin University. After initially joining Specialised Hand Therapy Services in 2003 she has worked continuously for 15 years, where her role has grown from OT to Senior Therapist, and from 2007 until now to Senior Clinical Manager. Farida has been involved in the teaching and mentoring of all levels of therapists, new graduates and students. She has also been involved in numerous research projects throughout her career as well as presenting at National Conferences, most recently: ‘PTSD and its effects on functional recovery following digital amputations’, and with Dave Parsons from Curtin University ‘Patients perspectives of the effectiveness of treatment modalities used in CRPS’.

Farida is known for the endless generosity of her time, and her ability and willingness to impart her extensive knowledge to others. She always ensures that those around her are well supported, nurtured and mentored to become the best OT they can possibly be.  She is an invaluable asset to the profession. The Award is just acknowledgement of her brilliant work mentoring and nurturing therapists and others throughout WA and was presented by the Hon Roger Cook MLA, Minister for Health at the Annual OT Breakfast. 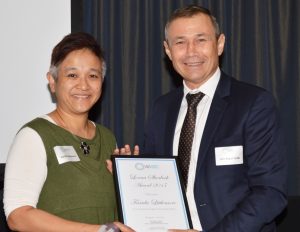